The landscape painter Janhendrik Dolsma is blessed with the gift of creating a sparkling spectacle on the canvas by painting only clouds, sunlight and reflections in the water, which keeps the viewer captivated. As a fervent devotee of the Wadden Sea area, the aforementioned themes form an infinite source of inspiration for his almost photographic-like paintings, in which peace, space and the romanticism of the northern landscape predominate.

Child of the sea
‘And with new music and in other words
Will I always be surprised again
And sing about the sea, the sea of the North
I feel at home there, that's where I come from.’

This beautiful verse from Het Noorden, sung by Paul van Vliet, could have been written for Janhendrik Dolsma. As a boy he was already fascinated by the immensity of the North Sea, and that overwhelming feeling never left him. During his period at the academy Minerva, his interest was awakened for Dutch landscape painting. After completing his studies in 1973, he made it his life's work to record the many faces of the Wadden Sea on the canvas. He describes the effect that the summery Wadden area has on him, as a 'mental shower'. In the summer he prefers to spend his days in nature, where he captures everything that fascinates him in drawings, paintings and photographs, armed with an abundance of inspiration, to pass through the winter months while painting.

Man as part of an immense natural whole
Dolsma has a tendency towards the aesthetic, or as he describes it, the endeavor to make a "tasty painting." In addition, in his paintings he wants to make his vision of the relationship between man and nature tangible, in which man is part of a immensely, of course entirely, similar to the feeling of being flooded, when you watch the surf on a summer beach day, while the seagulls are circling over your head. 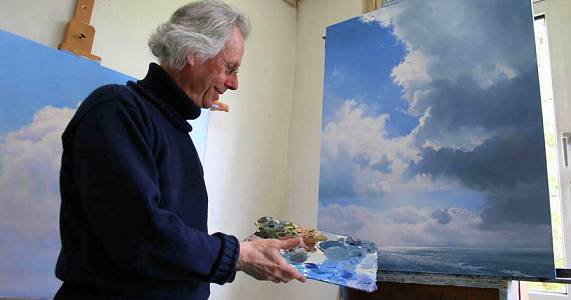 In terms of style Janhendrik Dolsma likes to be influenced by painting techniques from the 17th century and the Hague school. Emptiness and the romance of the landscape predominate as themes within his paintings. The human element, if at all present, always remains at a great distance. Very occasionally you see a tiny figure in the distance, watching the waves or a child playing at a pool on the beach. However, the peace and emptiness that characterize Janhendrik Dolsma's paintings is by no means boring or dead. Because nature plays the main role, Dolsma focuses all attention on the glare of the sun on the waves, a passing cloud or the vastness of the dune landscape, which seems to merge with the sky on the horizon.

Magic with sunlight
Janhendrik Dolsma knows how to play with the effect of sunlight like no other.
The sun forms the underlying decorum in its landscapes, although this itself is never visible: it usually hides behind a cloud or is just outside of the image, so that only its glare over the landscape strikes and forms contrasts. With the use of a minimum number of elements, Dolsma always manages to create a fascinating play of light, air and space.

Dolsma's landscapes are also characterized by the use of horizontal surfaces. You do not see a clear increase in the shape of a pole or tree and even the water is mainly seen from its peaceful side. Usually the sea is a smooth surface and if there is already a surf, the waves roll steadily towards the beach. The paintings by Janhendrik Dolsma are so true to nature that they look almost like a photographic impression from a distance. But with something extra, an almost tangible, spatial element. Dolsma says: "I find that change from paint to illusion something magical. It creates the illusion of tension, space and light that you do not see on a photo." 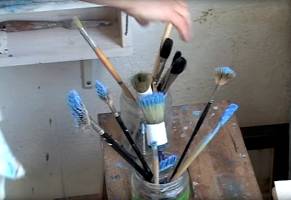 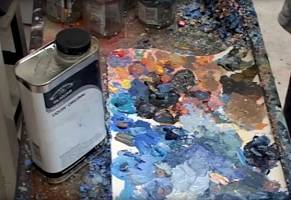