Taking matters into its own hands
After his studies at the Royal Academy of Fine Arts in Ghent, Philippe Timmermans made three-dimensional prototypes for decades, performing numerous assignments for museums and public institutions. He also names the publicity of his artworks for his own account. In 2011 he turned the wheel and decided to focus on his own creative expression from now on. The central theme in his sculpture is the representation of the male body in all its strength and vulnerability. In his free work, he can use the expertise he has acquired during his long years as a commissioned artist: he manages the art of shaping and the technique of molding models to the finest detail. As inspiration he uses living models or photo series of what he wants to depict. On the basis of this visual impression, Timmermans models his mother models in clay. Then a mold is made, with the final step of casting the image in bronze or synthetic resin and patinating the outer layer.

Classical sculpture translated to the present
The realistic style of Philippe Timmermans is based on the tradition of classical sculpture. Some of his sculptures are reminiscent of sculptures from Roman and Greek antiquity. The clear difference lies in the lack of the stylized character of sculptures from the ancient world. The figurative sculptures by Timmermans radiate deep emotion and reflection. One of his favorite subjects is the image of the Titans, from Greek mythology. The Titans were descendants of Gaia, goddess of the earth and her lover, the heavenly god Uranus. They are located in a metaphorical sense between heaven and earth, 'Inter caelum et terra', between dream and reality. For Timmermans they are a symbol of heaven and earth, reality and vision.
. 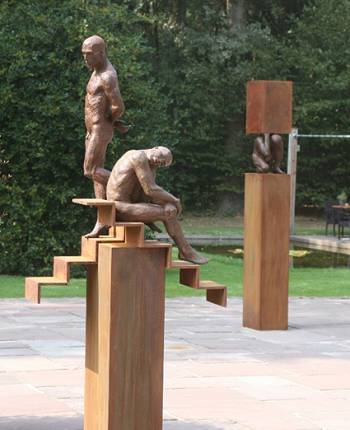 The sculptures of Philippe express the 'being human' in all its nuances and the tension between the different worlds.

We as people are pressed between the higher and the lower, between dream and reality, between desires and reality.


Ethnic diversity in bronze
However, Timmermans does not limit himself to modeling ethically appealing, classical sculptures. He also likes to deviate from the beaten track, for example in the series 'Ethnicity', for which he has created super dimensional busts of men from various ethnic backgrounds. From the depicted faces there is so much deep emotion that no words are needed to guess the story behind the bronze gaze. Another example is the African dancer, whom he observed during his rehearsals and with whose collaboration he came to a series of sculptures, where the dynamics of spatters. Or his dancing Dervishes, men with a bare torso and a long skirt, based on the Turkish Sufi culture, where the dancers dressed in long skirts move endlessly in a trance.

The man sculptures of Philippe Timmermans form a permanent part of the collection of gallery Wildevuur on the beautiful Estate Hiemstrastate. If you want to get acquainted with the exciting dynamics of the male body in bronze, you are welcome throughout the year in our gallery and sculpture garden.