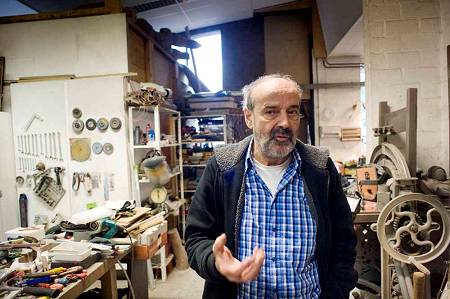 The bronze statues of Gerard Engels - mainly horses and torsos - show that they are made up of strips. With this he has developed a unique, characteristic style. A training as an industrial designer explains his interest in technology. Gerard Engels has his studio just across the border in the Belgian Retie.

Since 1974 Gerard Engels (1945) has his studio at home, on the edge of the forest in Retie. A house that he designed and built himself. There is a typical smell in the studio. "That is was", he explains. In the morning when I get up, I first heat a pan of wax to melt it. Daily routine. If the wax is liquid, I remove some from the pan and let it solidify on a sheet of aluminum foil. Once the wax has solidified, I cut broad strips of it. I use those bars to build up my sculpturess. By heating them again, they become malleable and you can work with them. "With a soldering iron, he melts the strips together, but just not completely, so that you see that the sculpturess are made up of strips. For his abstracted figurative sculptures, mainly horses and torsos, he developed his own style in this.

Gerard Engels, born and raised in Liessel near Deurne, moved to Gelderland as a child, but returned to Brabant in the mid-sixties to study at the Academy for Industrial Design in Eindhoven. At the Academy he learned to design three-dimensional objects and he gained a lot of knowledge about materials and techniques. But after this training to design small parts for the industry, that did not appeal to him. Engels wanted to work as an independent designer, but there was not much demand for that at that time. He went into education just like his father. At the end of the sixties, early seventies, he attended the MO-manual proficiency in Tilburg and then taught for years at the KLOS, a training for kindergarten teachers in Eindhoven, which was later added to the Pabo. For sixteen years he worked part-time, which allowed him to develop as a free artist. 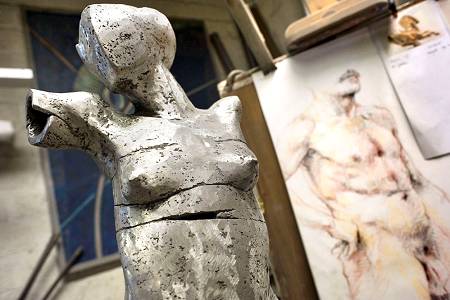 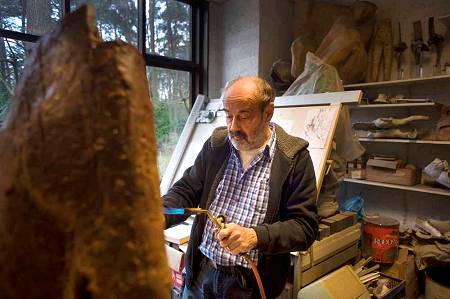 Computers
In 1987 he attended a CAD-CAM workshop at the Academy for Industrial Design, at a time when working with computers came up. With CAD-CAM you can create three-dimensional designs with the computer. "I am really a 3-D person. I see everything in 3-D. "Apparently he was so clever that he could teach at the same academy in CAD-CAM for twenty years. "I myself regularly use the program to visualize situations. For example, in 1996 I could show the clients how they would be placed in public space on a square in Vught for a statue, a large horse. "From all sides you could view the sculpture and the surroundings, complete with depth, because it was also presented in stereo and Engels had distributed stereo waves to those present. The assignment was inside. Engels adds: "It is interesting to see how far you can go with 'rendering', making an environment real by determining time of day and weather type, letting people walk by and letting birds fly over. Even the wind direction that causes wrinkles on the water, you can enter. "

"I started woodcarving at the age of ten. In my bedroom hung a plaster crucifix, ugly! Then I made one myself out of wood, with a potato knife. "When his aunt saw it and said she thought it was very 'clean', he also made one for her. "That was my first assignment." As a child, he was often drawing next to woodcarving, just like his father. He still likes to draw and often. Many studies precede a new work of art.
During his studies at the academy, he came into contact with antique dealers in Eindhoven. "Because I was handy in woodworking and recognizing all types of wood, I started to restore wooden Madonna and Christ statues for them that lacked parts. Then I put an arm or leg or I cut a missing Christ child for a Madonna. But I always restored the sculpture so that you could see what was authentic and what had been added. "

Self-taught
As a visual artist, Gerard Engels is self-taught. Initially, English worked in wood and he made abstract objects inspired by vertebrae and fruits. Gradually he started working more and more figuratively. As a material, for example, he used oak from a collapsed farm in Geldrop where he had lived for several years before moving to Retie. In 1976 he was able to visit old lock gates in the neighborhood of Retie that had been located in the canal since the beginning of the Second World War. This too was oak, but turned black by the iron oxides in the water. He has made large sculpture groups. 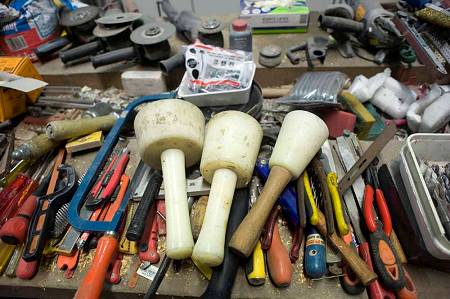 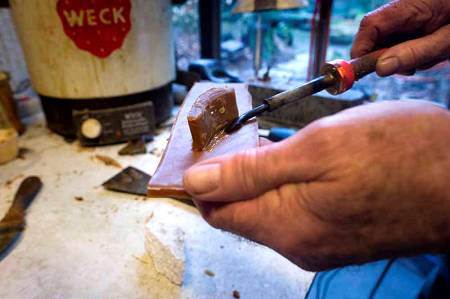 At the request of Stichting Artimond in Helmond he made Theater 't Speelhuis De Speelduivel. As material, he chose iroko, a tropical hardwood. "It was so hard that I smashed gouges and hammers. That is why I made new ones myself. I like to look for solutions. I am always working on technology. Finally, I am an industrial designer. "He also made tools for stone carving, so-called bottle hammers. But he did not like the chopping in stone. Twenty-five years ago he started with bronze. "Wood has no eternity value, bronze does." Bronze creates a self-protective layer through oxidation. In addition, bronze has a warm appearance, which wood does not have. His first assignment was to design a plaque in bronze, for a company in Weert. He made a model in wax and had it cast in bronze at Eijsbouts in Asten. At this foundry, known for casting clocks, he learned the techniques.

Gerard Engels uses three methods for his bronze sculptures. The first is 'cire perdue', the lost-washing method. "I started with strips. I build everything up was out of strips. "With a putty knife he makes the seams (almost) closed and he creates structure. What is special is that Engels does not use a luminaire for the reinforcement in these hollow sculpturess. "The sculpture has to be able to carry itself." In the foundry, cast and air channels of wax are made on the sculpture. Around this a formwork is made where a mixture of plaster with chamotte clay is poured into it. Once the gypsum has hardened, the formwork is removed and placed in the oven. After three days of burning at seven hundred degrees, the wax has been fired and the mold has been baked. The mold is turned over, buried in the ground and filled with bronze. This casting method produces two to four percent shrinkage. The bronze statue is therefore slightly smaller than the original design in wax. That was noticeable when Engels countered the horse Top Gun of show jumper Jan Tops in real life. Once it was cast in bronze, Tops noticed that this sculpture was really smaller. English goes for casting bronze according to this method to Eijsbouts in Asten, although they do not do much more about 'casting art', the casting of art objects.

Slurry
A variant of this technique is the use of 'slurry' (what looks like latex) with chamotte clay instead of plaster. The sculpture of wax is provided with seven to eight layers. With a so-called roaring burner, a burner with a flame of one meter, the sculpture is heated so hot that the wax runs out. The empty shell of chamotte clay is then baked in an oven at eleven hundred to twelve hundred degrees. This method is also called 'ceramic shell'. The casting of bronze takes place as described above. The advantage is that no shrinkage occurs with this method. The cast form in bronze is identical to the original form in wax and is therefore often used for high-tech applications. 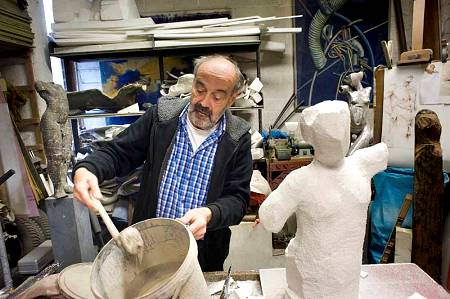 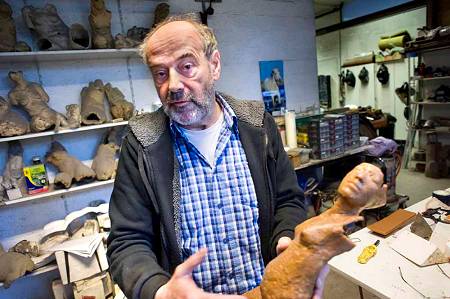 The second method is the hard foam method, which Gerard Engels developed in part. In this method, the core is formed by rigid foam. Around it the sculpture is built up from wax. The horse in Vught is made by this method. A luminaire is required for such large sculptures. It is cast in various parts via a mold of synthetic sand, after which the parts are welded together. This and the former 'cire perdue' casting method always produces some shrinkage. The bronze statue is therefore slightly smaller than the original design in wax.

Hard foam is also used in the third method. Here the shape is achieved by means of sanding. The mold is then sawn into pieces and hollowed out until a hollow shape of six to seven millimeters thick remains. Because the material is light, it can easily be blown and broken. That danger is always present with this method. Air and pouring channels are applied with tempex. In the foundry - English, this is done by the bronze foundry Boerekamps in Nederweert or the Melis foundry in Tilburg - a formwork is made and synthetic sand is applied both in and around the sculpture. If the sand has hardened, it can function as a mold. When filling with bronze (aluminum can also), the foam is treated.

Hammers
This method is therefore called the lost foam method or 'lost foam'. When the metal has solidified, the mold must be removed from sand with breakers. The sculpture is then sprayed clean after which it can be returned to the workshop. Patinating bronze with acids and salts is a technique that also executes English itself. This happens outside because of the harmful substances that are released.

Making bronze sculptures including the finish is a lengthy and technical process. In addition, bronze "needs time to become beautiful, that is, darker. That will take about a year and a half. " 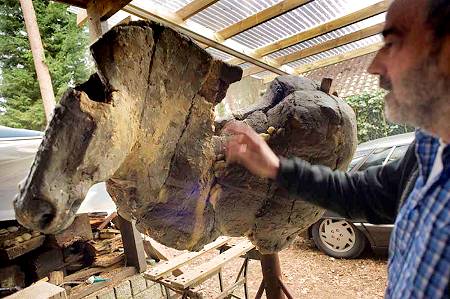 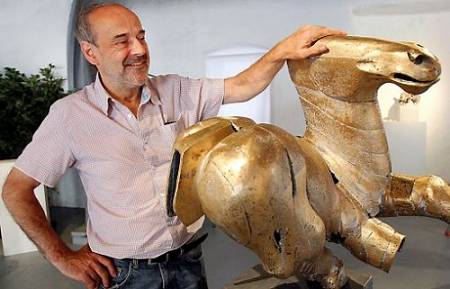