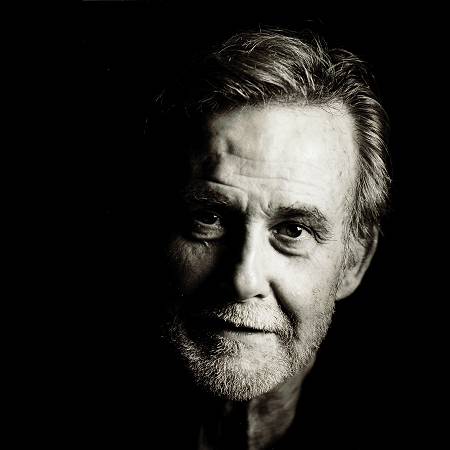 We are on the eve of a big anniversary exhibition by Leon Veerman and he asked me to write a piece for the accompanying anniversary book. It's April 2020 and I've settled in the sun-drenched garden with chirping bird sounds in the background. Good for inspiration, shall we say. Leon and I are not fans of complicated and in-depth art analyzes, but you can't let 40 years of artistry pass unnoticed. However, I warn you in advance; I keep it personal, to-the-point and above all lighthearted. That also fits Leon and his images, and is especially more fun for you because here and there a "tip of the veil" is lifted.

My first acquaintance with Leon Veerman dates from the early nineties of the last century. And yes, I feel like a dinosaur when I write this down. To be precise: his first exhibition took place with us in 1993, and I now realize that Leon, with his 43 years of age, was then younger than I am now (51). My husband and I had just started at the gallery and Leon was one of the very first artists we exhibited. As a springhouse gallery owner, I hadn't eaten any cheese yet, even though I thought the opposite at the time. I knew one thing intuitively, however: Leon Veerman's work is exceptionally good and we must keep it as an artist. No sooner said than done. Leon, then already a well-known artist with enough buyers and galleries, was really not waiting for us at the time. Nor can I say that his images flew off the counter in those early years. On the contrary. Our sales lagged far behind those of our experienced colleagues and I can now confess that in that early period we invested in so-called "sold images" ourselves to prove ourselves as a gallery and to maintain a collaboration. Fortunately, this bluff poker turned out well, and it was unlikely to happen then. We are still working together now. 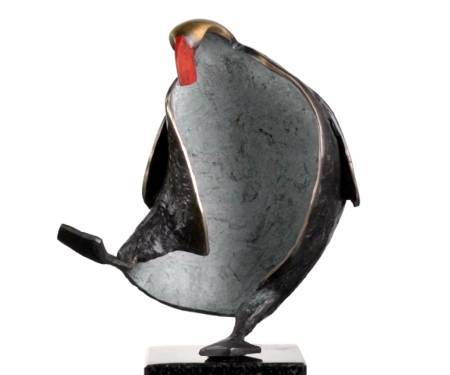 962/5000 But fair is fair. This says nothing about us, but everything about Leon Veerman. As an artist and a person, he is a blessing for every gallery. In the past 27 years I got to know him as a free but structured thinker, a hard worker, focused and driven and extremely perfectionist. Wonderful to work with. Quality above quantity is perfect for him. This attitude, combined with his love for nature as a motive to create, makes his images powerful with a clear signature of his own. An image from then does not really differ much from an image from now. The intention has remained the same, the change is in the form. Its organic spheres, compact and extensively abstracted, have evolved into a more airy, graceful and figurative form. But even if you now see one of his early images, it is still clearly one of his hand. That is the strength of his oeuvre. 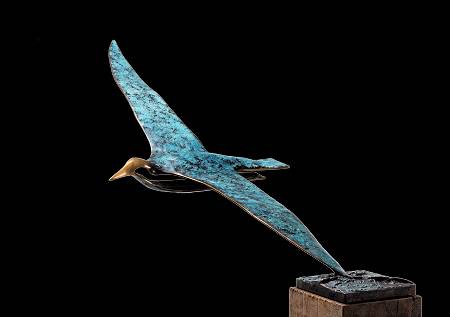 Practice makes perfect, but it also applies to Leon Veerman. As he has spent more flying hours, his skill as an artist has become so perfect that he is now able to explore the limits of the impossible, and thus the ultimate freedom. Many technical tours de force come from his studio today. And I know from experience that these "incredibly beautiful constructions" are often not even noticed by the viewer, because they are completely captivated by the charming overall picture. That is why I am going to point it out to you now, because I dare say that what Leon does is quite unique and inimitable. Browse his book, or better still, browse his real work, and consider a statue such as 'Motionless', 'Exercise in patience', 'Roaming the South Sea', 'The Silent' or any of his small busy bird figurines. 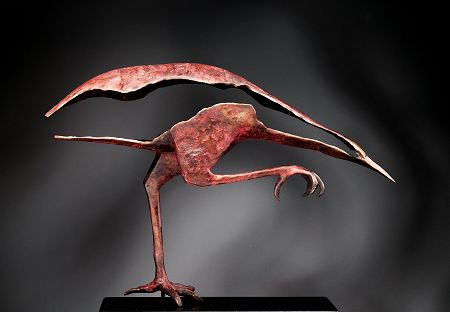 Don't be fooled by their seemingly simple and harmless shape. With almost nothing they depict a feeling and they know how to play your emotions flawlessly. Do not be tempted by their vain beauty, sense of freedom and funny human traits. I warned you: they'll pack you up in an instant. Take another look. How his images float, and I mean not only figuratively, but also literally. Do you see it now? How the whole floating construction and the weight of an image come together and be carried on just 1 small point. An image of Leon often only hangs on 1 weld seam, which is also a difficult place if you take gravity into account. Often it is the golden beak of his birds where the parts come together and the statue is carried. As an architect, he is now able to bend the laws of nature to his will, and thus build a very exciting but also very solid shape. 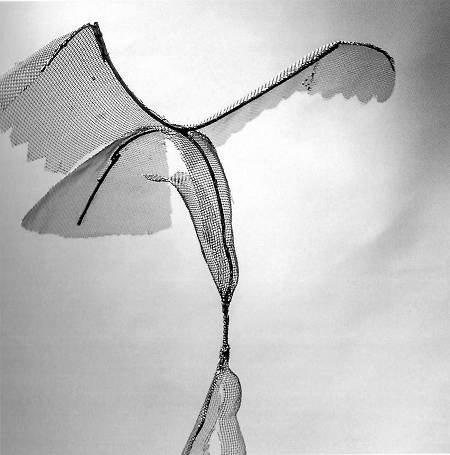 You will not be surprised that Leon Veerman is a great bird lover. If possible, he likes to roam around in the free nature around his living environment and admire the house-garden-and-kitchen specimens. As a real outdoorsman with a desire for freedom, he also bought a motorhome a long time ago. And as it enlarged his world, his images also grew wider and alien. He has made many journeys in recent years to visit and study more rare bird species, in remote areas and often harsh conditions.

The funny thing is that this camper is also used as a means of transport for the final end product. For every exhibition Leon appears with his camper, loaded with new bronze bird statues and stone columns. On the floor, the bed and at the bottom of the cupboards. He is often accompanied by his wonderful wife Mieke or ditto daughter Noor who endorse his missions and assist him on all fronts. Once the art treasures have been safely unloaded, we are satisfied at the kitchen table with a well-deserved coffee and a cheese sandwich. Because what you probably don't know is that Leon, as the son of a cheese merchant, only loves really beautiful cheeses that he brought "knowing us" as a gift. During these kitchen table sessions I probably also asked the same stupid question a little too often. What are you nice and brown: still gone with the camper? As if he had nothing better to do the months before and had been hard at work. His answer is invariably: no, I've just been welding a lot lately! 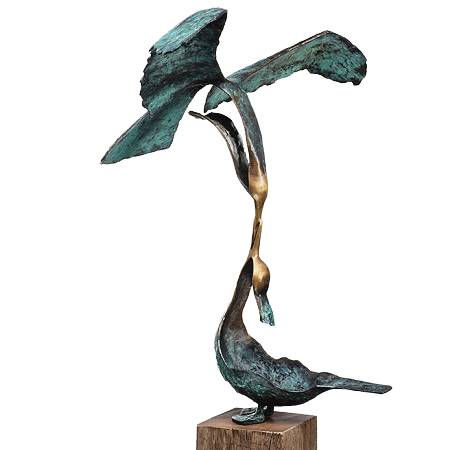 What I did not know, and always forget, is that the radiation from brown welding also makes you brown. Fine incidental or not, being a sculptor is a difficult job in which the title certainly does not cover the load. There is rarely "hewn" and it sounds nice and romantic, but let me just take away the illusion. There is nothing magical about it, except for the end result. As a sculptor you are both the architect, the construction worker and the transporter. Just say the whole production line on your own. You have to be at home in all markets, know a lot and be able to do it and, above all, be very handy. Strong is also nice. Nothing is done mechanically or digitally, everything is done by hand. And as icing on the cake, you almost get dirty during all activities in the process. Are you already looking forward to it? 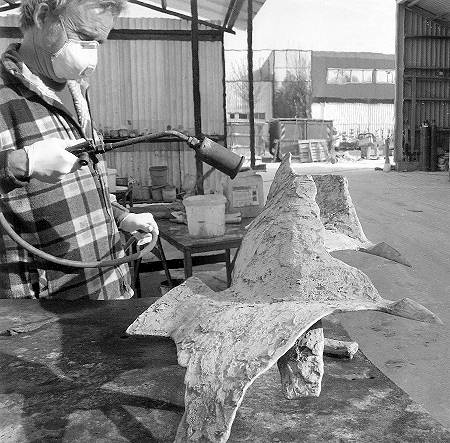 I often find that the creation of a bronze statue is still a mystery, and a heavily underestimated process, for many people. Dear shame, because a lot of blood, sweat and tears precede a beautiful image. Unfortunately, I am only allowed a limited number of words, but to give you an impression. It starts with an idea, then you sketch, you build a skeleton of welding wire and seven mesh and then model it with sticky wax. Then there are a lot of rides to the bronze foundry where you can cut your own creation, smear it with silicone paste and splatter with plaster and gravel to form wax models. If your statue is cast after a few weeks, and you have coarse pieces of bronze in front of you, you can get started with welding, grinding and sanding. How romantic. To top it off, you now put the burner on your image and process it with all kinds of steaming acids to give your birds those beautiful colored feathers. Now your image is ready, but it still needs a nice plinth. So on to the stonemason, fitting and measuring, dragging with plinths, drilling holes and gluing images. And when the total picture is finally in front of you, you can bring it back and place it at various galleries spread all over the country or a final (always nice) buyer, who always lives quite far away.

So you. Because it is you what Leon ultimately creates his images for. Art is nothing without an audience. The spectator only gives art meaning. And as a link between the public and the artist, I know from experience that the appreciation for and appeal of his images is great. Increasingly even. And perhaps not surprising in a world that is increasingly distant from nature. That also requires compensation and contemplation. In recent years we have therefore placed many images of Leon with just so many customers. In beautiful places and with special enthusiasts. Many a stone column was killed during our transport, so he now also uses unbreakable wooden bollards that fortunately also benefit the tough and natural character of his sculptures. Together with Leon, we have stood in many a pond, laid foundations in mud and pouring rain and welded and patinated the people on the spot in the garden because an image was "just not perfect enough". You understand that Leon now means more to us than just his sculptures or artistry. 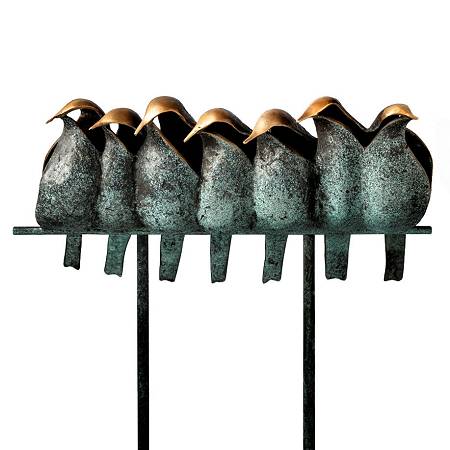 He has more than deserved a one-off major retrospective for his 40th anniversary as an artist. Preparations for this started last year and for a year Leon Veerman worked very hard to present you a good overview, an anniversary image and this book at the beginning of June 2020. And suddenly everything became uncertain. If you read this in 2020, you know that the whole world has stood still in recent months because of the corona virus. If you read this text over a longer period of time, you have hopefully forgotten this because we have been able to put the virus behind us. In recent months, however, the question has been whether and how this exhibition can continue. However, the final decision to do it was not difficult. Especially now Leon Veerman's images are more appropriate than ever. Because they bring a message that we can eat now and hopefully learn something for the future.

More with less, for the love of nature.
When form and space are reduced to the minimum, content and expressiveness gain.