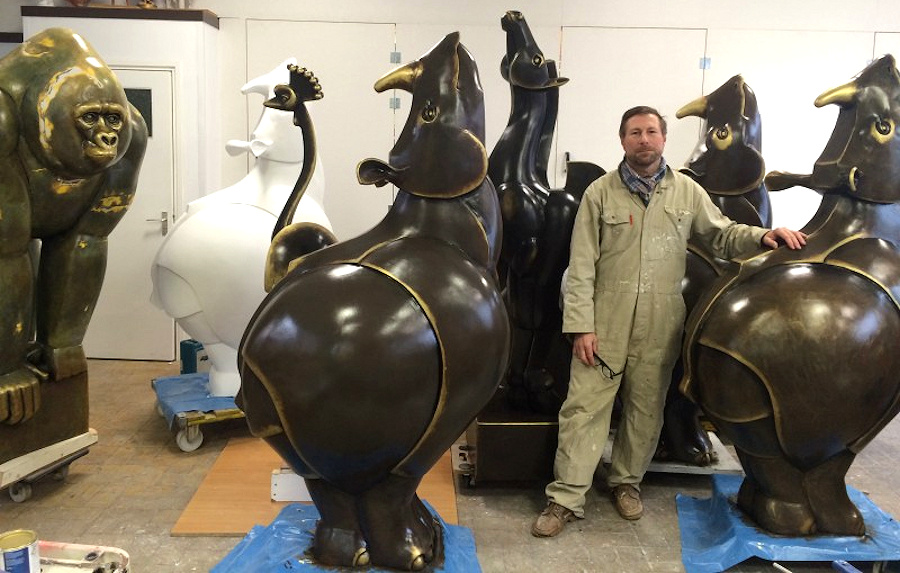 Frans van Straaten is an internationally renowned sculptor whose powerful, often large sculptures are exhibited and sold all over the world. The imposing bronze sculptures of Frans van Straaten are also admired throughout the year in the sculpture garden of Wildevuur, which contrasts with the charm of the historic estate of Hiemstrastate. 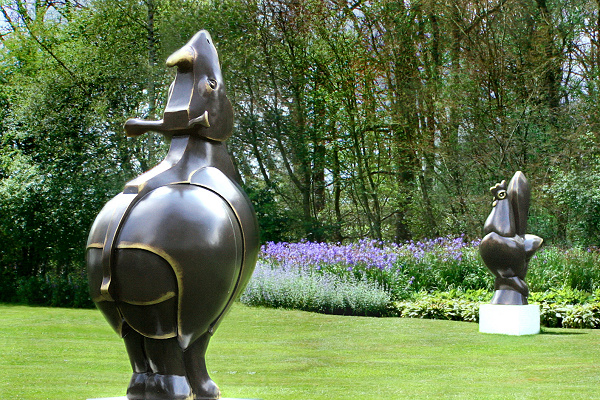 Harmony between strength and movement
Frans van Straaten (1963) was born in The Hague, where he later pursued the education as a Teacher of Arts and Crafts. After completing his diploma, he studied at the Academy of Fine Arts in Rotterdam, the city where he lived and worked for many years, but recently he moved his atelier tot Limburg in the south of Holland. After his studies, he initially experimented with various materials, but soon developed into a sculptor of bronze sculptures. His early works were mostly abstract in shape, but in the course of the years, Frans van Straaten specialized in shaping tight human and animal figures. In addition to pure, clear lines, motion and power are the central theme in all its bronze sculptures.

Frans van Straaten is constantly seeking harmony between strength and movement. Human figures are immortalized during an elegant dance or leap and their animal images are jumping into their eyes by their energized energy: a snapshot in the full dynamic of a movement. The sculpturesact as metaphor: a bull stands for strength, a peacock for pride and the dancer reflects elegance.

Inspiration from many ages
As an artist, Frans van Straaten is certainly not unkind: he likes to inspire himself through various periods in art history. The tight and detailistic forms of ancient Egypt fascinate him as elements of the Renaissance, such as the art of ancient masters Michelangelo and Leonardo da Vinci. Nevertheless, his sculptures due to their sleek design and clear lines are always modern, which, however, does not affect their expressiveness and expressiveness. With attention to detail, sharp lines and the creation of spaciousness, van Straaten knows how to depict the essence of a sculptures. His bronze sculptures are full of power and excitement, but remain graceful and airy at the same time. 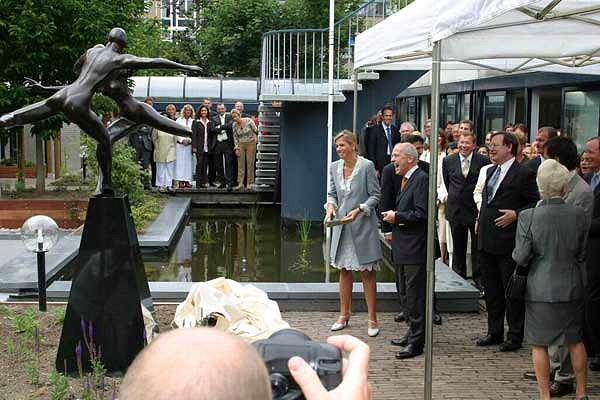 Exhibitions from Cairo to New York
The current collection of Frans van Straaten includes over 300 bronze statues, ranging in height from a few centimeters to almost four meters. For the sake of exclusivity, his sculptures are usually cast in a limited edition. Van Straaten manly creates free work, but also creates images on behalf of individuals, companies and institutions. His work can be viewed permanently in galleries, exhibitions and fairs around the world, such as the TEFAF in Maastricht, the Zamalek Art Gallery in Cairo, the Dutch Art & amp; Business Event in Qatar and the Art Expo in New York. Highlights from the artists' carriere from van Straaten include placing a 4 meter high bull on a roundabout in Capelle aan den IJssel and the unveiling of the sculpture 'Go Together'  by Princess Máxima in 2004.


Do you want to bring the power of the bronze sculptures of Frans van Straaten into your mind? That is possible all year in the beautiful sculpture garden of gallery Wildevuur. A wide collection of sculptures by Frans van Straaten can also be viewed in our online gallery. Background information and an overview of his works can be found in the art book Frans van Straaten, A quarter century in bronze that is for sale via our webshop.