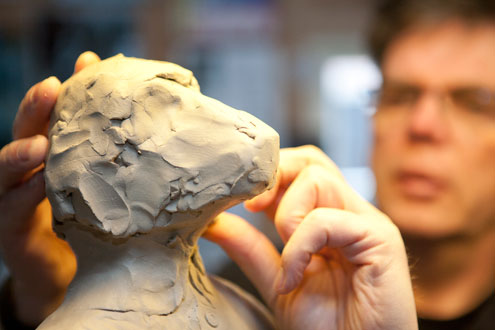 Peter Hiemstra is an incomparable ceramist, who is looking at people and society in a fabulous reality. He often speaks openly his surprise about human activity, which surpasses our imagination over time. The way he deals with this amazement is, as he expresses himself, by making it 'unimaginable'. While working, Peter Hiemstra thinks his own humorous, sometimes even bizarre, but also vulnerable and integral world. 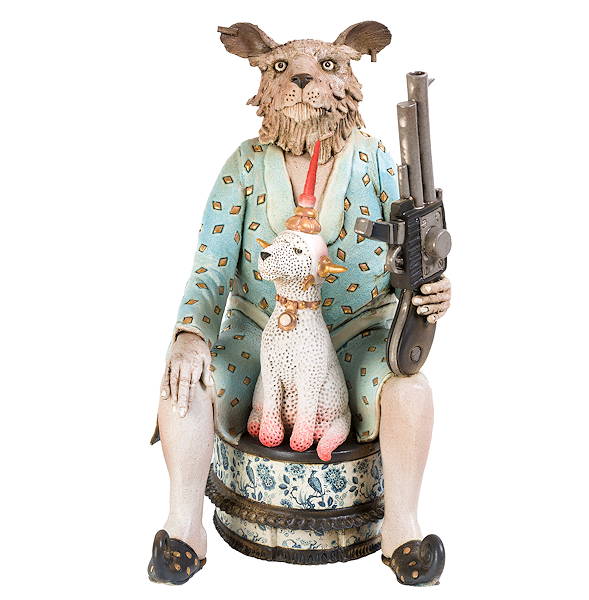 The beast in man
The sculptures of Peter Hiemstra are not unambiguous forms, but consist of stories: lively scenes and events, sometimes with various protagonists, which are intertwined in the most bizarre ways: an 'ordinary Dutch bear', with a ceramic column growing out of his head, a 'giraffe man in its natural habitat', or 'heroes and villains', a wall sculpture, with a collage of comic drawings and old photographs, a ceramic sculpture and in the middle a beast, which seems to be a cross between a deer and the wolf of Little Red Riding Hood. Peter Hiemstra creates his own laws and truths through his sculptures. And we, the viewers, are allowed to stare, admire and continue to amaze us.

Most of his ceramic creations resemble people with animal heads, which initially call for entertainment. Because of their attitude, the attributes they carry with them or their extermination, the border between man and animal fades. Under the funny first impression, however, there is a more grim layer. You wonder if the animals have to imagine an imitation of man, or just a caricature of man, who, unfortunately, acts as an animal too often. Peter Hiemstra lets us think about the way we look at the world, our own ideas, values and beliefs, while at the same time he is mocking us. 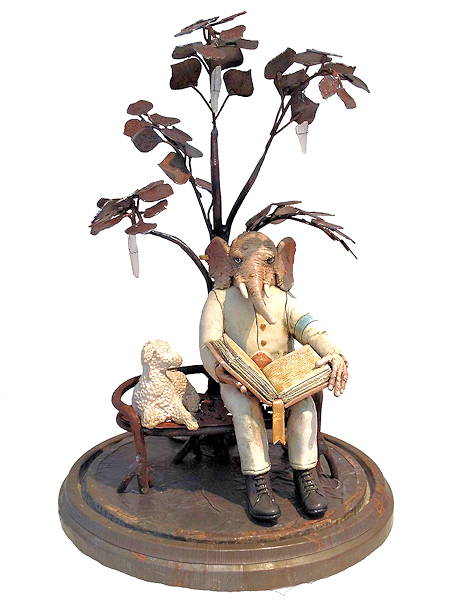 Project Caravan
The Caravan project is an artist’s collective of Peter Hiemstra and Henk Slomp. A unique symbiosis between ceramics and metal, the elements that the two artists prefer to work with. In 2013 they created the Caravan in the framework of this cooperation installation. In the large hall of the Martena museum in Franeker, a fantastic procession of sixteen large cars was displayed at a fourteen-meter-long table. The imaginative carriages that are part of the caravan transport the most strange creatures. Bird of paradise from a fantasy world, surrounded by mysterious objects.

Since then, the artists collective has been approached several times for major projects in and near Oldeberkoop, the home of Peter Hiemstra. For example, in December of 2016, the two were given the assignment to place a commemorative monument in the cemetery of Oldeberkoop. On a lawn near the graveyard, a tree of corten steel grows from the ground, a symbolic memorial place for premature children. Egg-shaped, porcelain fruits hang under the steel leaves of the tree. In each porcelain egg a message or a meaningful object can be left behind, after which the egg is closed and hung underneath one of the leaves. There is room for a simple text on the outside of the porcelain shape.

The most recent joint project of the Caravan is a memorial pillar. The monument consists of a white, obelisk-like column of ceramics. On the column there are three important words from top to bottom, which form the basis for a society without conflicts and war: tolerance, freedom and peace. The fire in the shell of corten steel, mounted on top of the ceramic column, was lit for the first time this year during the commemoration on 4 May. The monument serves as a constant reminder to victims of war and violence, celebrating peace and freedom and dwelling on important life issues. 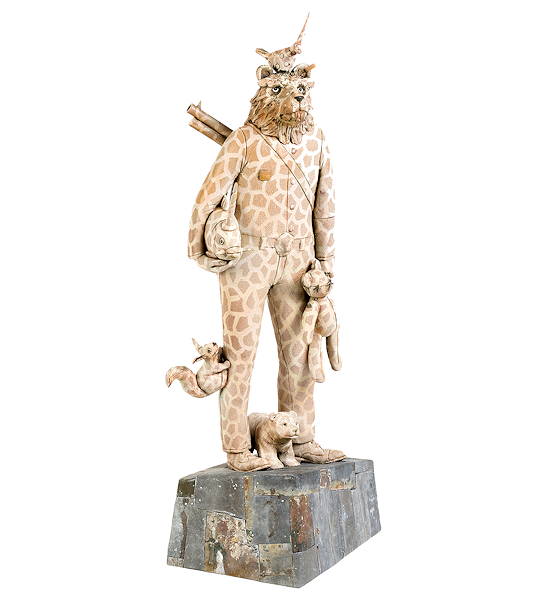 Versatile artist
In addition to his work as a sculptor, Peter Hiemstra is at home in many markets. He was curator of various exhibitions in Drenthe and taught ceramic techniques at the Classic Academy in Groningen. His works are part of the art collections of the provinces of Friesland, Drenthe, Noord-Holland and the German Oldenburg, and are also included in various private collections.

At the beginning of next year, we pay special attention to the work of Peter Hiemstra, during the exhibition The World Invented, which can be seen in gallery Wildevuur from 27 April to 10 June 2018. If you want to know more about this extraordinary ceramicist, please note the date in your diary.