The surrealistic perspective of Michiel Schrijver 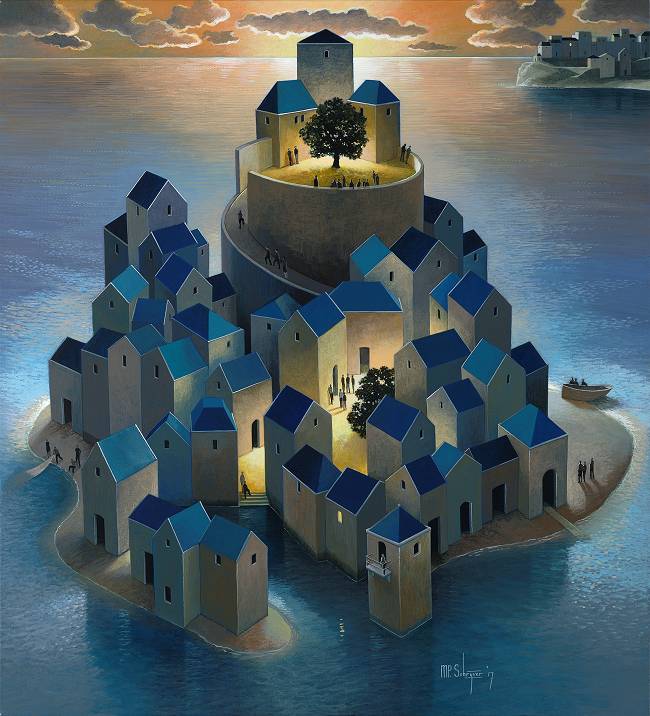 For figurative painter Michiel Schrijver, painting is a form of travel. He guides the viewer to the universe of his fantasy. Every painting is a reflection of the wonderful worlds that he has discovered inside during his travels. This makes Schrijver a kind of modern Gulliver who captures his fantastic adventures for us in acrylic.

The paintings by Michiel Schrijver are extremely original and painted perfectly. We come across the strangest buildings, between which the minuscule human protagonists raise some wonder at the viewer. They all seem to be looking at something or being busy with something that makes you wonder what actually happens there. Michiel Schrijver himself says about his paintings: ‘Of course many questions arise about the world that I create, but I do not need to know the answer. If you know, something has been lost.'. 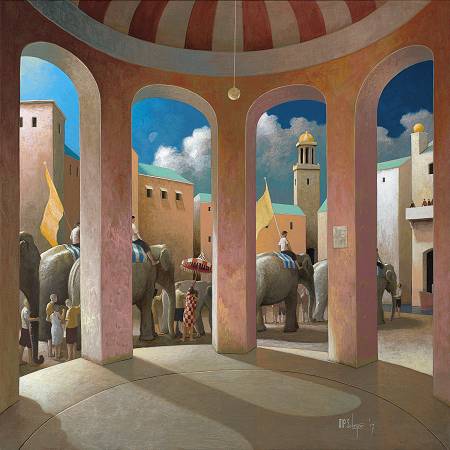 Far across the border
Michiel Schrijver (1957) was born in the Gooise Blaricum, but his painter aspirations would later carry him far beyond the Dutch borders. He began his art education in 1976 at the Dartington School of Art in Devon, followed by the Byam Shaw School of Arts and finally the Camberwell School of Art in London, where he graduated in 1981. Afterwards he deepened his painting skills at the Dutch Center for Crafts in Amsterdam, after which he opened his first gallery and studio in 1985. Since 1993, Michiel Schrijver has been working exclusively as an autonomous painter. Before he starts a painting, he draws entire sketchbooks full of his ideas. Only the sketches that can withstand the master's critical eye are captured on the canvas with acrylic paint. Certain elements always recur: ingenious buildings with pillars, domes, bridges and arches, often with ribbons, waving flags or signposts with numbers and numbers. Whether or not a deeper meaning is attached to all these elements remains open to interpretation.


Dreams in Mediterranean spheres
 The paintings by Michiel Schrijver are characterized by a calm, extremely pleasant atmosphere. When you see his cities, villages and seascapes you automatically get a holiday feeling. As a perspective, Schrijver usually opts for a high or low viewpoint, as a result of which the pictured scene gains in strength and depth. In terms of color and symbolism, the paintings almost all have a Mediterranean atmosphere. In contrast to the buildings, however, people are not depicted in detail. They are small, unspecified figures, which only evoke a certain familiarity with us through their attitude. In combination with the artfully curved pillars and colossal buildings, they evoke an almost unreal atmosphere. The whole is reminiscent of a surreal dream, but a very pleasant one.


You are cordially invited to a small 'tour de surrealism' at gallery Wildevuur from 19 January to 25 February 2018, during the exhibition ‘An invitation to travel’ 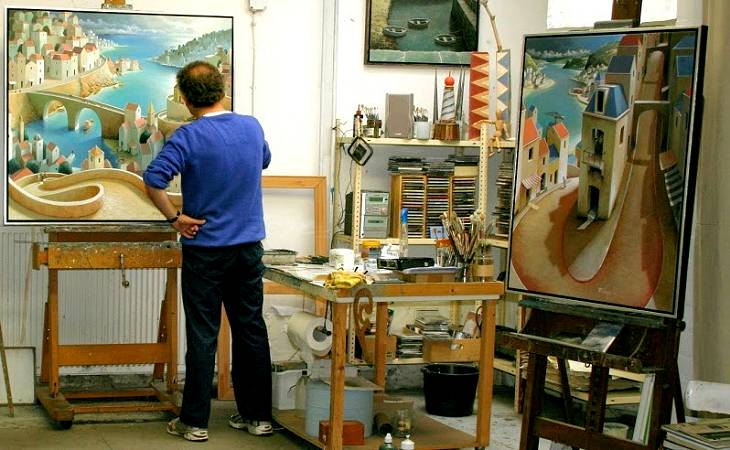 If you want to know more about the imaginative worlds of Michiel Schrijver, take a look at his own website.