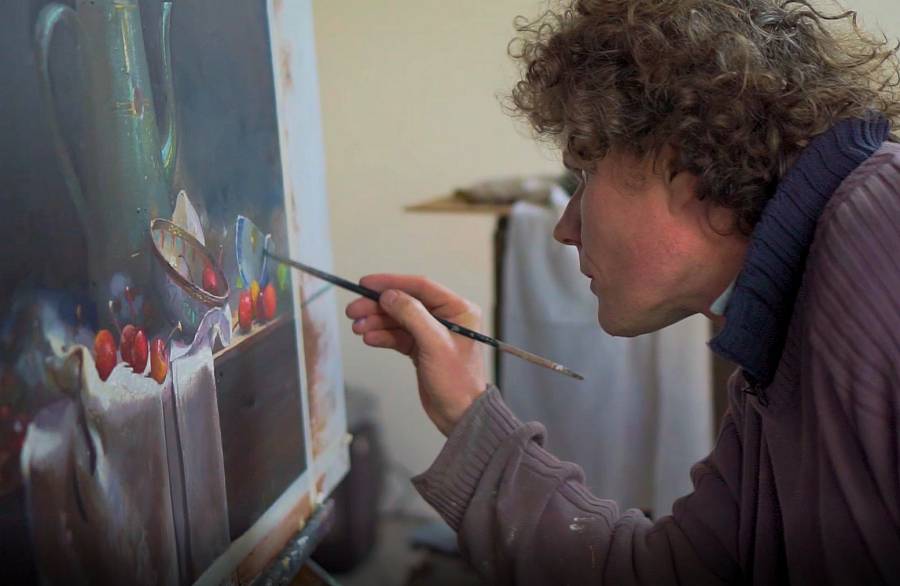 Simeon Nijenhuis (1969, Zaandijk) graduated in 1993 in drawing / graphics at the Minerva Academy in Groningen. He became known with a series of large etchings of cathedrals. In 1999 he started to focus on oil painting.

In the workshop of Simeon Nijenhuis hangs a still life of a Chinese dish with grapes. "A favorite subject of mine, grapes are so beautifully delicate and transparent."

Still lifes are displayed everywhere in the studio. "I don't even get to some, I am rather impulsive. If an idea comes to mind, I want to know immediately what it looks like. I am often busy with ten paintings at the same time. "

"I started painting around" 99. That was surprising for people who knew me from my etchings. But I am rather cyclical: something keeps me busy non-stop for a certain time and then something new usually comes. When I was busy with my etching from the sea, I visited the exhibition "The praise of seafaring" in Boymans and there the idea to paint started. I realized that I did not come up with a subject like the sea with the linear approach that was so obvious when it came to etching. But I found the soft gray tones of those 17th-century sea painters incredible. I wanted that too! "

"Initially I still tried color etching, but that was a drama. At the academy I had never painted or cared about color. And color is something complicated, you can't just do that. Nevertheless, I have experienced that you sometimes have to dare to change course if you want to stay fresh and inspired. After years of etching, I was faint with that squabbling and squabbling of lines. I wanted some kind of peace in my work. "

"At an opening in Utrecht someone once said to me:" Your work is so vital and dynamic, almost aggressive. But in a few years you will no longer be able to make these kinds of things. ”He was proved right. When you get older you sometimes want to make something that is silent. This is possible with oil paint, because you can paint very beautiful surfaces that, in addition to the dynamics, ensure the peace in a work. What I did first was make a number of study trips. To Florence, Paris, New York. Look at the old masters. I walked feverishly through the Louvre, to Van Gogh, Chardin, Corot. I absorbed everything, especially color. " 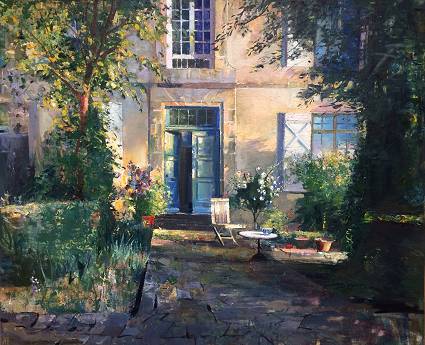 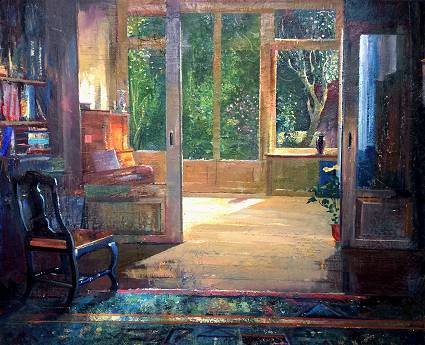 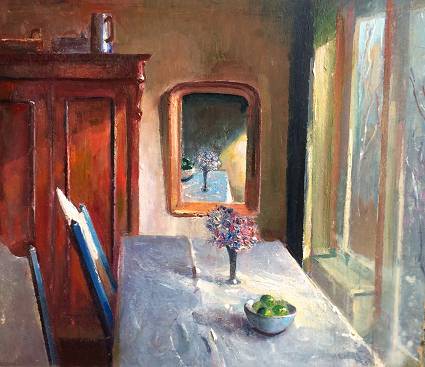 "When I actually started painting, I knew one thing for sure: I wouldn't become another neo-impressionist. I aspired for the depth of the 17th-century masters. Many contemporary painters use colors that must immediately seduce. A blue against a bright red. The Jan Cremer palette that is omnipresent. I like colors that carry a mystery. The soft color transitions of a painter like Claesz Heda move me enormously. For me, a good painting must evoke a mood. "

"In the 20th century, a painting became a concept, an illustration of an idea. I want a painting to become an experience again. A painting must "live". Stir your senses. If you look at a chestnut painting, you should be able to smell the fall. To meet my own standards, I had to believe it myself. I have made hundreds of studies. You always investigate something else. It was not just about mastering the technique, but also about developing a vision. So search for subjects, collect items. Search for what suits you. Only then will you get the magic mix between technology and vision. "

"Actually, I was a bit stuck in the still life. It was intended as study material, but I became addicted to it. It has drastically changed my work: from the enormity of cathedrals to the intimacy of three grapes in a Chinese dish. But the reality is fascinating; the color of yellowed pages, the shine of leather. "

"However, before you can make a painting that is truly spatial, a lot of water must be carried to the sea. What I gradually learned is that you cannot ignore certain laws in painting. In order to express your own personality, you must understand a number of generally applicable rules. Often contemporary painters become stubborn too quickly, then you always see the same uniformity. When I once looked at the matter through my eyelashes at an exhibition of the Royal Grant, I saw all brownish surfaces on the walls. While those painters were just busy putting their 'own' self into their paintings. But if you look at Terborch, Van Mieris or Vermeer, you can take them apart. While they are based on the same schemes and themes. Fascinating right? That is how Simeon Nijenhuis paintings naturally arise. I am not concerned about it, I am not going to sail a "uniqueness course". "

"On the contrary, I enjoy working on themes that I come across in painting. Floris Verster painted a bowl in 1900, Dick Ket painted him in 1930, Jan van Tongeren in 1960 and I now paint him. " 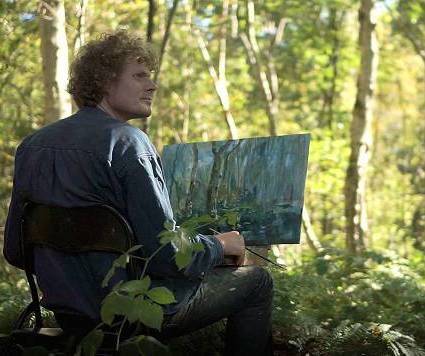 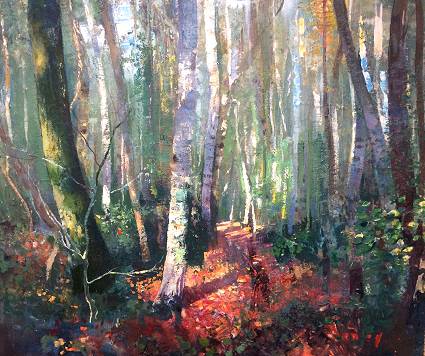 "That makes me feel good. Art is also a bit of folklore. For someone like me, born in '69, wanting to be original, asking for neurotic fiddling. What you get is all kinds of far-fetched nonsense. We all want to be unique so much, but we also look very similar. In my opinion art is more about what binds us than about what separates us. "

"I am now enjoying painting. I get more and more speed and spatiality in the paintings. And I learn something every day. "