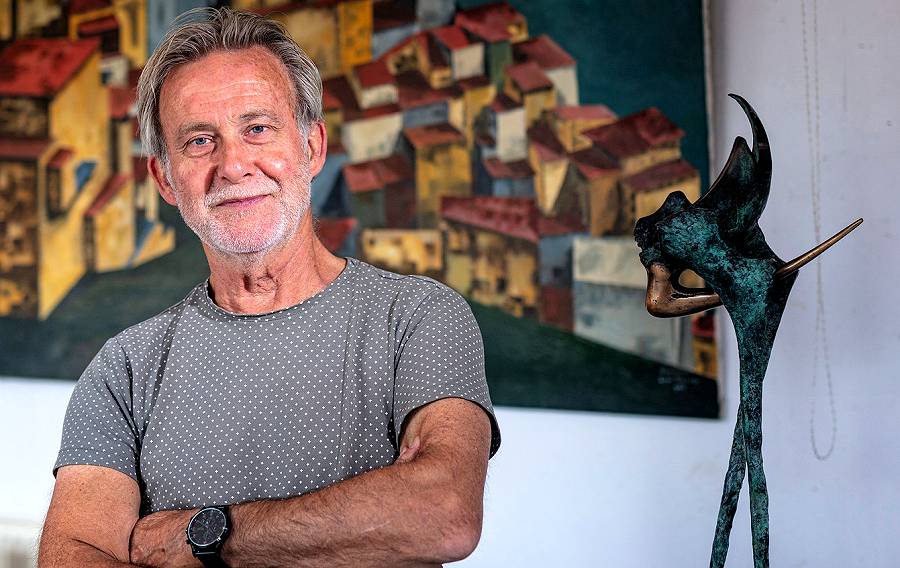 Leon Veerman has been a sculptor for 40 years and is popular from Australia to Russia: "You have to keep believing in what you do"

From Australia to England and from Russia to Taiwan. The work of sculptor Leon Veerman (70) is loved and appreciated worldwide. With the starting point "More with less", the Bodegraver developed his own style and focused on sculpting spheres and birds. Veerman has been a sculptor for forty years this summer and celebrates this with an anniversary exhibition and an overview book.

“I am most proud of the fact that I managed to earn my money as an artist. The Netherlands has about 10,000 artists, but about a hundred can earn a good income, ”says Veerman. ,, That did not happen by itself: you have to leave a lot to it, have discipline and continue to believe in what you do. Building a name takes time. ”

Veerman had a love for art when he was young, but his father, a cheese merchant, did not like going to the Art Academy. "There was nothing to be earned from that." Veerman therefore followed the meao, fulfilled his conscription and went traveling. As a 24-year-old he was about to emigrate to Canada, but made an attempt to get accepted at the Art Academy. To his surprise, it worked.

That stone carving was excellent, but it takes months to get a big sculpture

At the Art Academy in Utrecht, he and two fellow students got the idea "to cut in stone". Because the Netherlands has no culture of stone sculpture, they left for Italy for six months. Once graduated, Veerman fully focused on sculpting. “You have to focus on one thing. I am not as wonderful as Picasso, who can do different techniques. For me that has become sculpting. ”

Complex perfection
A homemade painting in his studio refers to his Italian time. Furthermore, the space is now almost empty; Veerman's work, which mainly consists of spheres and birds, is currently on a retrospective exhibition in the prestigious gallery Wildevuur in Hooghalen, one of the better galleries in the Netherlands.

“After the Art Academy I started to focus on the spherical shape. The spherical shape is a perfect and complex shape that changes as soon as you intervene. Birds come from my own interest. I do not make a literal representation, but I want to represent the action, dynamics and human characteristics of birds. I leave out everything that is not important for maximum effect. ”

Cut in stone
His style is minimalistic. It is not without reason that the exhibition is called "More with less, out of love for nature". Veerman now mainly makes bronze statues, but once started with stone. ,, That stone carving was excellent, but it takes months to get a big picture. It takes a certain mentality, I'm too impatient for that and my back got bad. ”

Veerman hardly "cuts" yet. Now he sketches, makes a model with wax, builds it up with welding wire and seven mesh, has it cast in bronze and finishes it.

,, As soon as I see the tension or affection I want, it is good. What I see my hands can make, you achieve that by doing it a lot. Today, fewer and fewer sculptors work in bronze. A colleague, Nelson Carrilho, and I jokingly call ourselves "the last of the Mohicans."

Mauritshuis
Building a life as an artist was not easy. Thanks to "stupid jobs" and the work of his wife Mieke, we managed to keep our heads above water. "I started with free exhibitions in hospitals and town halls, but I soon realized that if I did that for another thirty years, I would never be able to live on my art."

“I talked into a few galleries. A gallery on the Noordeinde in The Hague dared. I was overjoyed. Until I heard that only one sculpture of my first exhibition had been sold. Still, the gallery owner wanted to continue working together. What turned out? That one statue was bought by the curator of the Mauritshuis. Slowly I built up a name. ”

Veerman has certainly been an established name in the art world for the past twenty years. His work can be found all over the world and the prices of his works reach 25,000 euros per sculpture.


During the opening of the anniversary exhibition, I sold 24 sculptures at once

900 guilders
“During the opening of the anniversary exhibition, I sold 24 sculptures at once. That is fantastic, of course, but I also had to think back to the feeling of the past. How incredibly happy you were when a statue was sold and you suddenly had 900 guilders in your wallet. That feeling has become much less. It will become more obvious. ”

Veerman prefers to sell to enthusiasts. “Like an American from Mexico who saw my work on a cruise ship and approached me over the Internet, an Australian who had an sculpture of a heron shipped to her home country, and a Taiwanese who kept emailing me and buying six sculptures. But the most special thing is when people ask you to make an sculpture for the grave of a loved one. It is already wonderful when someone buys a sculpture, but something like that gives something extra. ”

Veerman's clientele mainly consists of individuals and companies. Veerman does not work much for municipalities. He makes an exception only for his place of residence. "Bodegraven is different. I grew up there. ” In the Kerkstraat, the Julianaplantsoen and in the Limespark there are sculptures of him and the three-meter-high artwork on the site of the former rope-making shop in Oudewater is also his.

Sketch
Although Veerman is 70, he does not think about quitting. “Artists never stop, but I no longer feel like printing exhibitions. This anniversary exhibition is the last. For an artist, there is nothing better than sitting in his studio in the morning and not having to think, just sketch. I look forward to doing that again. Actually it will be just like before, but with forty years of experience. ”